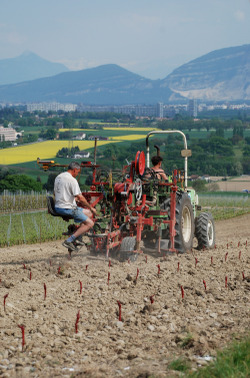 Perfumed, crisp and best drunk young – in the next two years – was the general verdict on Geneva’s 2006 white wines, presented to the public Monday at La Colombière in Lully. The reds have plenty of tannin, are well-balanced and can be drunk relatively young but they will also age well. A chorus from the wine industry agreed with remarks made by Geneva counselor Robert Cramer that "we drink our reds too young. Our culture doesn’t yet let them age."

This is changing, as is Geneva’s wine industry, whose specialty is rapidly becoming a panoply of popular, well-regarded wines. Geneva’s wines went through a difficult patch in the 1990s after market protection disappeared. In 1985 the Chasselas grape accounted for 50% of Geneva’s wines. In just 20 years this was halved, to 22% in 2006. Gamay, whose rosé has long been a Geneva

specialty, remains a favourite, at 30% of grapes planted. But the other third is now a mix of 30 grape varieties, from Sauvignon blanc to Gamaret with interesting wines such as Zinfandel and Viognier that were not found in Geneva a decade ago.

Chantal Lonati, co-owner of La Colombière, is the 2006 millesime’s godmother, an honour given each year to someone who has helped promote the canton’s wines. She and her husband, chef Bernard Lonati, have actively promoted the best of Geneva’s wines at their restaurant, a Michelin one-star gastronomic landmark which closed 30 March after 25 years. She noted at Monday’s presentation that the revival of the Geneva wine industry owes much to a group of grower-producers now in their 50s, who "have used a lot of creativity and done much  research" to improve the canton’s wines. Not all the experiments have worked, she candidly noted, but she praised producers for their willingness to experiment. 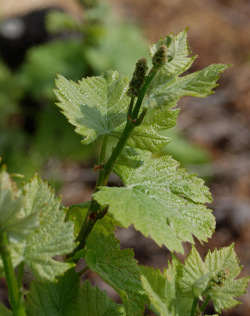 Geneva is Switzerland’s second smallest canton, but the country’s third largest producer of wine. It often comes as a surprise to people who think of Geneva in urban terms to discover that fully 50% of the canton is agricultural. The 100 wine producers account for SFr 148 million in direct value-added income for the canton. In addition to people employed in growing grapes, producers are responsible for employing 2,000 people. The wine business, like the watch industry, is part of Geneva’s image as a centre for fine living, so the newly bottled wines are opened with a mix of pleasure and trepidation – the public enthusiasm for the new varieties in particular is crucial to economic success.

Winemaking is a business that leaves nothing to chance in the 21st century where, globally, consumers have more sophisticated palates, but per capita consumption is dropping in wine-producing countries. In Geneva, authorities have given their support to soil studies which have just shown that there are nine major classes and 100 types of soil, a rare variety that will support a wide range of grapes.

Alexandre de Montmollin, head of the cantonal viti- and viniculture station, told GenevaLunch that "this really offers us an opportunity, having such diversity in the soil." He believes a chain of events have led to a situation today where the canton’s wines are experiencing a comeback. It started with borders opening in 1992. The canton at that point had many grape growers who sold their fruit to producers. They began working with cooperatives and then, once interested, they began training with research stations. As more winemakers learned new skills based on the most recent research more varieties of grapes were planted. At the same time, the climate began to change. Since 1969 the grape harvest has steadily occurred earlier and is now a full two weeks ahead of what it was 40 years ago.

The result, for consumers, is a rich mix of wines that promise no shortage of new discoveries.