Editor’s note: This is the fifth in a year-long series on the life of a Vaudois winemaker, or vigneron, in the Lake Geneva region. GL follows Raymond Paccot and Domaine La Colombe in Féchy from the 2006 harvest to the next one in 2007. (click on photos to view larger)

For three weeks in late March and early April Paccot and his team bottled much of the 2006 harvest. Other wines will sit longer, such as the Réserve Colombe Rouge, bottled in September.

Féchy, Switzerland – April, and the weather is suddenly balmy. The last of the bottles slide into their cartons and move upstairs to the storage space. In three weeks the shelves have gone from being nearly empty to bulging at the seams. "That’s always part of the problem," says Raymond Paccot, studying the space. "Part of the year you don’t know where to put it and then suddenly you have too much space."

He says it with satisfaction, having just overseen wine put into several thousand bottles, part of the total of 150,000 bottles La Colombe produces in a year. Three weeks of hard work have gone into la mise en bouteille, or bottling, where hygiene and business management join oenology. For Paccot and other winemakers, this is the moment

when the harvest begins to more clearly resemble potential sales. For a winelover, it is the moment when all those grapes and the mysterious liquid in large vats suddenly become that recognizable, tempting object: good wine in a bottle. 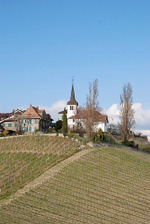 The process began, this year at Paccot’s, 21 March: The cave is chilly when the day arrives to start bottling the wine, and Andrea, the trainee, has on cap and gloves even though he’ll be working hard moving wine all day. The decision about when to put the wine into bottles varies from one winemaker to another and depends mainly on the wine’s readiness, but also on stock levels. In Paccot’s case, the day starts with a phone call from a woman who has run out of her beloved rosé. He calms her with the news that because the shelves are empty – it’s a popular wine – they will be bottling some of it this week. She seems relieved.

Outdoors, Féchy shines in the sunlight and some of the vineyards are turning green. These are mostly vineyards that belong to growers who, like Paccot, subscribe to biodynamic methods where grasses and wildflowers are left between rows to keep the soil moist and reduce erosion. For passersby the result is magnificently-coloured hillsides.

The view towards the lake from Féchy resembles a giant cinema screen where you can watch the weather moving across the Lake Geneva region. The weather is wild, with snow showers in Evian, France, directly across the lake. The sun shines in Geneva but a large black cloud begins to build in the Jura, heading for the city. 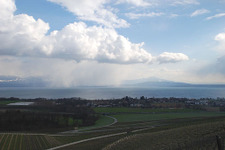 The mix of sun, snow, rain and wind that brush each few metres of altitude in a slightly differently way contributes to the interesting variety in wines in this part of Vaud. Some of La Colombe’s vines are on nearly flat stretches at 400 metres altitude on the fringe of Féchy. Others run down the steep hillsides above the town. Paccot is a winemaker who is constantly pushing the edges of traditional winemaking and he has several varieties of grapes. His Réserve Colombe Rouge, for example, is a blend of four varieties: Garanoir, Gamarey, Gamay and Pinot Noir. It’s special even among Paccot’s already unusual collection of wine because the reserve he bottles is a different blend each year, taken from grapes harvested late from vineyards in four villages. 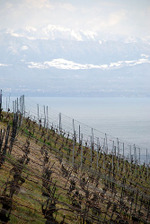 It is hard to find an unimpressive view among the vines of Féchy.

Paccot, like most Swiss winemakers, has a modest operation by world standards, and bottling must be done over three weeks to allow time to move from white to rosé to red and to shift from the machinery for screw-cap bottles to those with corks. The more expensive, limited stock wines that are corked are put in heavier bottles. The wine itself is all important, but growers are farmers, and a good deal of any farmer’s life is spent working with machinery. 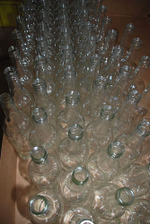 The empty bottles are readied. Most come from Vetropak in St. Prex, a national recycling centre. Switzerland recycles about 95% of its bottles.

In the cellar, Paccot samples the wine coming from the large metal vat where it has been stored since the harvest. Hoses carry the wine out into the bottling room, an open area. 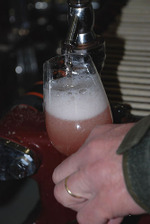 The wine coming out of the vats is pale and slightly troubled. Winemakers vary in the amount of filtering they like to do, but generally speaking, an unfiltered or barely filtered wine is still too "alive" to keep more than a few weeks or months. Large winemakers that sell inexpensive mass market wines often use three filters to stabilize the wine. The price is a loss in quality. En route to the bottling area Paccot’s wine passes through two filters. 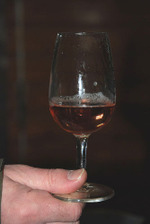 After filtering, the wine is clearer, less "nervous." 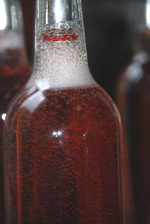 The wine, newly bottled, looks almost carbonated for a moment before it begins to settle down again. 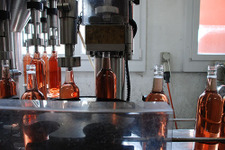 The bottles move along a conveyor belt. These rosés will receive screw-top caps. A machine checks that the wine levels are correct. 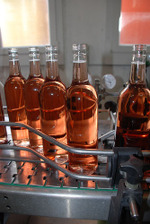 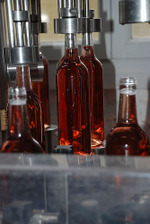 The caps fall into place in the assembly line from their basket overhead, ready to be fed into the machines. 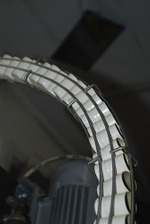 The bottle necks receive their capsules then move along to have screwcaps fitted. 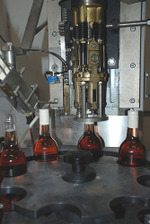 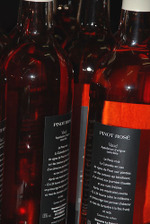 At last, the label, the final step for the bottle along the belt. 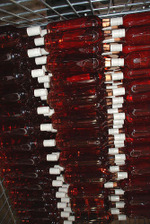 One by one they are gently lifted off and left to sit briefly before being placed in cartons. The bulk of the bottling process is done by three to four people. 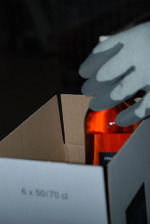 Along the belt towards the temporary storage area. 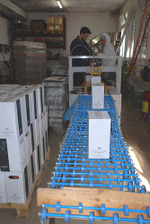 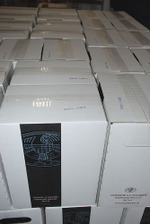 Ready to move upstairs to the storage area, where mainly of them will pause only briefly before being delivered to waiting customers. Paccot for years worked closely with noted Crissier restaurateur Fredy Girardet and many restaurants throughout Switzerland have his wines on their cards. He still produces wine with and for Girardet, now retired.

The bottle now looks like what we have on our shelves or in our cellars. 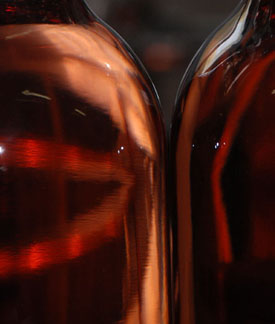 Earlier articles in the series:

"Raymond Paccot talks about how it all starts with the grape," 9 October 2006