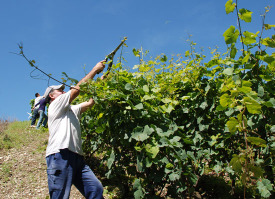 Sierre, Valais (GenevaLunch) – The Swiss wine industry is well into a strong revival, shrugging off economic doldrums elsewhere by reinventing the image of one of the country’s favourite beverages after milk. Ninety litres of milk are consumed every year, 57 litres of beer and 41 litres of wine, on average.

In April 2008 the Swiss federal agriculture office published statistics showing that wine consumption rose in 2007 for the first time after several years of falling, then stabilizing. Consumption of Swiss wines rose 5.7% and other wines 2.3%. The number of hectares of vines planted also increased. According to the government, the turnaround is the payoff of 15-plus years of Swiss wine producers replanting and rethinking their offer.

Enter the Grand Prix du Vin Suisse, the country’s main national wine competition, where judging ended Tuesday in Sierre, Valais. The number of entries was up 20% over 2007: a daunting 1,860 wines from 460 producers were sampled. Wines from every wine-producing canton were entered. The results will be announced in November at Swiss Wine Night, a gala event to be held in Zurich.

The enthusiasm for the competition, organized by Vinea and Vinum wine magazine, is the latest in a series of signs that the world of Swiss wines has moved out of its 1980s stupor to become very dynamic. 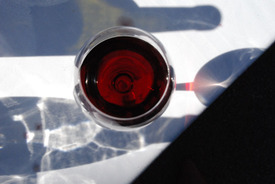 This year slightly more reds than whites were entered, 970 versus 890, which reflects consumption in Switzerland today. Of the nearly 15,000 hectares of wine planted in the country, 8,500 are now red and 6,500 white.

The reds entered in the Grand Prix include Pinot Noir wines, made from the country’s most widely grown grape, with more entries (306) than the iconic Chasselas (302), the white wine to which the reputation of Swiss wines has been tied traditionally.

The competition, with 11 categories, makes it clear that one of Switzerland’s strengths when it comes to wine is diversity.

And diversifying is what Swiss winemakers are getting up to. The amount of Chasselas planted throughout Switzerland has gradually been falling, replaced largely by Gamaret, Merlot, Garanoir, Cornalin, Syrah, Petite Arvine and Sauvignon blanc, government statistics show. Some of these varieties are used in blended
wines, which the Swiss are increasingly making. Other grapes, such as Syrah, are producing excellent award-winning wines.

Swiss Syrah astonished the wine world in November 2007 by sweeping several top awards at an international competition. In March at the Vinalies Internationales in Paris, the oenologue union’s competition, Swiss wines won an impressive 60-plus medals, reports Alexandre Truffer, on the Swiss wine site Romanduvin.

Truffer in May told a group of French wine industry professionals that the past 15 years have seen a dramatic change in the world of Swiss wines, with producers leading the consumer change from mid-range whites, drunk as aperitifs, to better reds, designed to accompany fine cuisine.

The change came about primarily because of a crisis in the marketplace as a result of a Swiss wines glut in the early 1990s, followed by the end of protectionism.

Stricter road rules may have played a role in reducing the popularity of the Swiss aperitif, with the legal limit falling to the equivalent of one glass of wine in 2005.


Swiss producers began to see a brighter future in better wines: the country’s extraordinary landscape gives rise to a startling number of terroirs defined by their particular combination of soil, exposure to sun, air currents and wind, and altitude. Pinot Noirs, famous as the grape of Burgundy’s best, also grows happily just over the border in Switzerland, for example.

The Grand Prix du Vin Suisse signals another change: the growing determination of Swiss wines to make their mark on the world stage, despite only 2% of the national production being exported. Where many producers were once content to supply an assured home market, today they are anxious to produce superior wines.

The next step is to let the world know about them. To this end the encyclopedic Swiss Wine Guide, with a third edition due out in November in French and German (an Italian version exists but is not being revised), will be published this year for the first time in English.

It offers the most detailed and complete view found anywhere of Switzerland’s wine industry, from vineyard to the bottle, steeped in its cultural identity and rooted in its beautiful terroirs.

Ed. note: GenevaLunch is published by Zidao, which is responsible for the English version of the Swiss Wine Guide. GL publisher Ellen Wallace writes a wine blog for GenevaLunch, “Among the Vines.”