Editor’s note: This is the seventh in a year-long series on the life of a Vaudois winemaker, or vigneron, in the Lake Geneva region. GL follows Raymond Paccot and Domaine La Colombe in Féchy from the 2006 harvest to the next one in 2007. (click on photos to view larger and see more images (paccot_vinetrimming) in the GenevaLunch photo album) 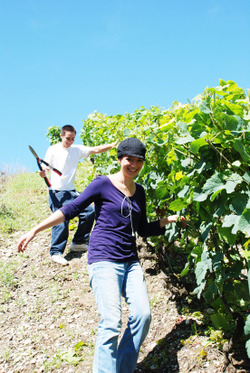 Féchy, Vaud, Switzerland (GenevaLunch) – "Grapevines produce their leaves late but then grow very quickly," winemaker Raymond Paccot says, surveying the lush green hillsides above Lake Geneva in early July. So quickly that within weeks La Colombe cellar’s team is out snipping back leggy shoots on all the vines. If the weather pushes the vines to continue this rapid early season growth, a second cissailler, or scissors job, might be necessary in late July or August. The French prefer the verb rognier, and there are dozens of regional terms as well for the ages-old process of keeping vines in check.

"We try not to have growth after the end of July, early August," Paccot notes. To the untrained eye it appears that the workers are simply cutting off any bits of vine that stick too far out or too high above the tidy rows. Behind the simplicity lies farmers’ magic: keep the air moving at the bottom of the plant, where the grapes are quietly filling out and let the young leaves grow above during this first part of the growing season.

"Grapevines are like society. Until the leaf reaches about half its size it takes energy, but then it starts to give energy back to the plant. The adult leaves die first and in the autumn the young leaves nourish the plant." The growers’ goal is to find the perfect balance so that the leaves are helping, not feeding off, the rest of the plant as harvest time (September for most of the region’s wines) draws closer.

Paccot’s team walks along the rows, wrapping stray shoots inside the training wires, then on the steep banks they trim back, by hand, those that stick out. Part of the group moves from vines above Féchy to others at the edge of Bougy-Villars where the rows are wide enough for a tractor with a whirring blade no one wants to get close to. 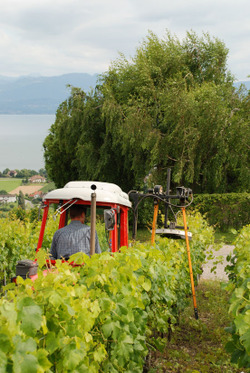 In July the rich green rows shape the landscape in the Lake Geneva region, but it has not always been this way. Rows have grown wider to accommodate machinery as mechanization replaces handwork except on the steepest banks. "A hundred years ago the rows were wide enough for horses to pass," Paccot says, but "two hundred years ago there were no straight lines." Vines were pruned to grow in circles, which were easier for people to work with during the growing and harvest seasons.

Ed. note: A larger collection of "Paccot vine trimming" photos is in the photo album.

Earlier articles in the series:

"Raymond Paccot talks about how it all starts with the grape," 9 October 2006