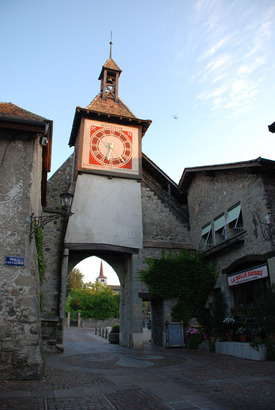 Editor’s note: GenevaLunch is a media sponsor for the event, which takes place in GL’s home town. View our  "Moods of St Prex" collection of 50 photos by Ellen Wallace, part of the GL photo album.

Photo, left: St Prex’s main street and, through the arches, the roman church: concerts will take place in both areas.

St Prex, Switzerland (GenevaLunch) – The St Prex Festival comes into its own this year as a new arts event that is likely to become a regular star on the region’s cultural calendar. The quality of the festival itself, the unusual blend of arts and the spectacular setting combine in only the second year of the festival to create what should be a memorable event.

The festival’s choreographer is Cecelia Mones Ruiz, who was for many years ballet mistress and soloist as well as assistant to Maurice Béjart. Among the many notable performers: Brazilian pianist Ricardo Castro. The festival features a variety of music and dance under a tent-covered main street in the old town, with some concerts to be held in the 12th century church high on a hill overlooking the medieval village and Lake Geneva.

A highlight will be a concert the final night, 2 September, with the audience selecting 20 songs from a list of 99, performed by soprano Irene Maessen and pianist Marja Bon of the Wendingen Ensemble, Netherlands.

St Prex’s vieux bourg, one of the region’s tourism jewels, provides the perfect setting. A Roman place of prayer existed on the site of the current small church that overlooks the old town. The village itself was built along the lakefront in 1234 by the Archbishop of Lausanne to protect the population from Savoyard attacks. Villagers within the wooden walls used fire to signal the cathedral in Lausanne from the point of land that juts into Lake Geneva, in times of attack. 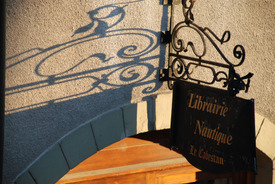 In the 18th century the village became a holiday place for some, with genteel summer homes built by the well-off in nearby Morges. Many of the buildings in the vieux bourg today date back to that period. The enseignes, or wrought-iron signs that hang above street corners and over businesses, are a vestige of those artisan-rich days. The Vieux Moulin on the lakefront, which serves as the town’s sports and cultural hall, was part of a gravel pit that was worked until 1955. Before that time the lakefront served many purposes, with its sandy stretches providing the raw materials for glassmaking, giving St Prex its inheritance as a glass centre: its bottle recycling factory is one of three in Switzerland, a country that recycles nearly 96% of its glass.

St Prex’s history stretches even further back, with archeologists finding in its soil tools and materials dating back more than 7,000 years.

The village today is a mix of commuters who work in Geneva and Lausanne and the many towns between,  with a quiet weekday life that nevertheless remains centred on the town. There are two primary schools and a secondary-preparation school, a mix of small businesses including eight restaurants and cafes, and large ones such as Vetropak and Ferring Pharmaceuticals. Agriculture continues to play an important role, with vineyards, orchards, fresh vegetables, grains and roses grown commercially within easy walk of the old town.

For tourists, the town has a lakefront walking path (20 minutes each direction) on the Geneva side of town, three beaches. The plage des dames is a tranquil and tiny, nearly hidden stretch of benches and smooth rocks while the other two draw swimmers, ping-pong players and families with picnic baskets. The grassy beaches are rarely crowded.

The true charm of the village lies in its flower-decked facades and gently curved streets, designed to cut out the wild winds of Lake Geneva. Early in the morning the official village fisherman goes out and late in the day, depending on weather, the lakefront is dotted with windsurfers or rowboats from the club in Morges. Walk through the village on a stormy day and you marvel at the lack of wind, until you reach the outer streets, when you suddenly understand why windsurfers flock here on days when the waves are high, the water choppy.

An old clock and bits of the walls that once surrounded the village are all that remain of that time nearly 800 years ago when St Prex worried about being attacked, but there is a strong sense of another era, another pace of life here. It is one of the rare villages where sunrise and sunset, winter days and wild weather days colour it beautifully, making it just as good for visiting as those perfect Lake Geneva summer days when sky and lake are blue and the water is placid.