Paris, France (GenevaLunch) – The first Christmas I spent in Paris, many years ago, came as a shock: I imagined that this haven of French culture and style, famed for its luminescent elegance, would put on a shopping and lights show for Noël to beat anything I had seen in the US or the UK. 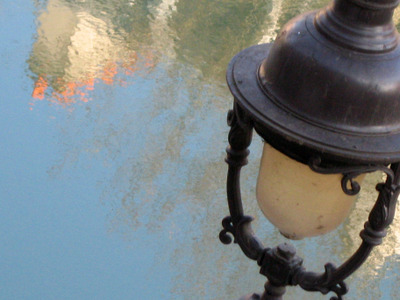 To my confusion, the city simply got colder and less crowded.

Paris in the second half of December has since become one of my favourite places to be at this time of year. It’s one hour by plane, three and a bit by train, with plenty of options from Geneva or Lausanne.  The language is the same, French, but the accent has fewer hills and is faster, and the city could only be French. The northern light leaves streets dark and intimate but with canyons of light streaming above, creating two almost distinct cities. Christmas returns Paris to Parisians. You’re hard-pressed to hear tinned Rudolph(e) and Santa tunes, or even “Hark the Herald.” Christmas music isn’t so much in shops as it’s listed on posters for classical music concerts at magnificent old churches like the Madeleine.

Families expect to get together, but Christmas trees are few and far between on the streets and gift-giving does not create the kind of American and British consumer frenzy that puts the word “stress” on people’s lips. 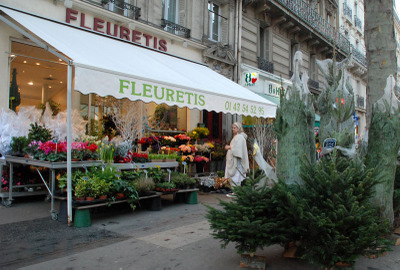 Photo: In six hours of walking across the city five days before Christmas, these were the only trees for sale, on Boulevard St Germain in the Latin Quarter.

The city belongs to Parisians, not the tourists, for a change, and even the Place de la Concorde and the Hotel de Crillon, dripping in golden lights, have the air of a French woman who has thrown on spiked heels and freshened her lipstick before rushing out the door. The streets are busy with cars, as always, but pedestrians are few, and none of them linger. It’s simply too cold, a damp bone-tapping chill that pushes you towards busy cafés where all the world seems to be unwinding scarves and speaking French.

A wreath here, a red satin bow there, but otherwise the streets give few clues that this is a holiday season until 21 or 22 December, when lights are strung up in a kind of Gallic shrug that implies there are more important things on the menu: l’amour, perhaps, or planning the New Year’s Eve menu. 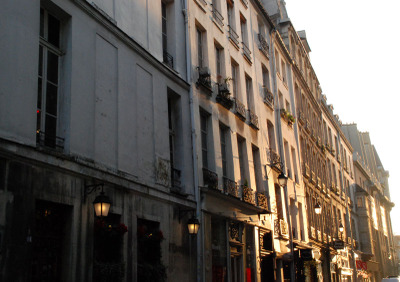 Photo: canyons of northern light, high above the streets.

Ah, now this is a holiday that is near and dear to the Parisian heart! Suddenly, during the week between Christmas and New Year’s, more than the Place de la Concorde is bright and cheery but the lights are spilling onto the streets from the butcher shops and the cafés that sell oysters and bakeries that shimmer with gooey cakes, French yule logs called bûches, decorated with chimney sweeps, pigs and other good luck symbols.

My second holiday shock so many years ago, and it still startles me, was that Parisians, even the most frugal of them, throw financial caution to the wind when 1 January approaches. Tables groan under the weight of the food, wine and champagne.

The budget a family normally reserves for food for a month disappears in one night of extraordinary dining.

There are two reasons to visit Paris in late December if you don’t happen to be French. It is great fun to be a spectator at this seasonal French sport of tying up one year quietly then suddenly rolling in the next with a luxurious flourish. 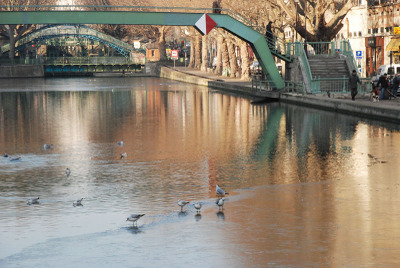 Equally wonderful is the rare chance to bask in the cool but immensely rich northern light that shows the city’s treasures at their best, from the quais and bridges of the Seine snaking through the city to the gulls playing on their beaches of ice in the middle of the Canal St Martin.

Editor’s note: a great discovery on this trip was the recently revised France Today magazine plus web site, rich in tips and trends, for sophisticated travellers. It has been around for 23+ years but its new owner recently took on Judy Fayard as editor, who is colouring it with her particular vision of Paris and France. Fayard was for several years the European bureau chief of Life magazine and she has edited several excellent magazines including the elegant European Travel & Life, published until 1994. She is a regular contributor to the Wall Street Journal.

A collection of 20 photos: “Paris in December,” by Ellen Wallace, is part of the GenevaLunch photo album.