The Swiss have known for some time now that their wines have grown up, with many excellent bottles that now stand out among among the world’s best. The French have taken longer to come around to the same conclusion, but the new issue of La Revue du vin de France, one of the French wine industry’s bibles, gives 100 top Swiss wines their due. 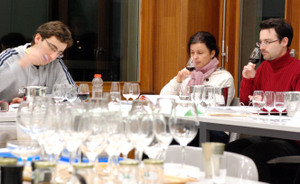 Photo: wine tasting course at the Federal Agricultural Station at Changins, near Nyon, where Swiss wines are one of the specialties

The Lausanne area’s 24 Heures newspaper starts out by saying "Chouette, alors!" and goes on to explain that two tops sommeliers sampled and judged 500 Swiss wines (a drop in the bucket, when you consider Switzerland has some 6,000 wine producers. Le Temps (suscription article) refers happily to the French who "font l’éloge des vins suisses."

Oddly enough, media in Switzerland reported a couple weeks ago that there was a significant drop in Swiss wine exports in 2007, something like a 60% drop (I can’t confirm the figure yet). That appears to makes little sense given their growing reputation worldwide until you look at Swiss wine exports. In 2006 they finally rose to nearly 2% of production. That’s right, 2%, after years of hovering at 1%. And the rise to that figure was due mainly to a handful of large German supermarkets buying quantities of mediocre-quality Swiss white wine. Now the Germans have lost interest, the supermarkets have reduced their purchases and some of the lesser producers in Switzerland are undoubtedly hurting.