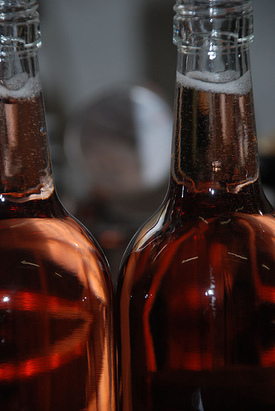 Swissinfo carries a useful roundup article on the use of wood chips in wine in Switzerland. Writer Adam Beaumont notes that cantons are overriding federal legislation that has, since January 2007, allowed Swiss winemakers to use oak chips. The chips, whose use does not have to be mentioned on labels, give a cheaper and faster way to add oak barrel aged flavouring to wines. For winemakers competing with New World wines the option can make a difference.

The debate is not really a heated one, however, and it hides the reality of a Swiss wine market that has been improving dramatically. Twenty years ago the country had a glut of mediocre wine, too much white wine and far too many heavy drinkers who guzzled bottles of cheap local stuff. Switzerland’s legislation has blessedly made it relatively easy for the industry to adapt to an open market. Geneva’s Roger Burgdorfer of Domaine du Paradis, one of a new breed of creative winemakers, told me last month that Geneva has been able to move far faster than neighbouring Beaujolais, which has suffered badly from its dependence on Gamay and the creaking machinery of the French bureaucracy. Burgdorfer grows a startling number of different grape varieties, including Zinfandel, which is not often found in this part of the world.

Swiss vines have been pulled up and new ones planted to add variety to the overall offer. At the same time, winemakers like Raymond Paccot at La Colombe in Fechy are carefully nurturing their vines to ensure long lives, and his wines made from vines that are more than 20 years old show the country’s ability to produce truly excellent wines.

Switzerland is in the privileged position to do this because of its many changes in altitude, exposure to sun, soils and microclimates, thanks to the mountains and Lake Geneva. Grower-producers have been replacing grapegrowers who sold in bulk to winemakers, with neither fully understanding the other’s art. Red wine has come into its own and with a healthy economy there is a larger group whose tastes are more sophisticated, while the old guzzlers are being replaced by a younger generation of over-consumers who turn to drugs and other drinks. which explains some of the drop in overall wine consumption.

I’ve just registered for Vinea, Switzerland’s wonderful wine fair in Sierre the first weekend in September. They are right to push for recognition of the quality of Swiss wines, which have been steadily winning top international awards. There are now many, many excellent Swiss wines but the thing that really makes them interesting is diversity, to an extent you are hard-pressed to find anywhere else in the world. The producers recognize that this is one of their strong points.

Adding oak chips to cover up the extraordinary bouquet of a Cornavin or Syrah from Vetroz, for example, would be like pouring a little Barbie doll toilet water into my Chanel No. 5.