Morges, Vaud, Switzerland – Arvinis, the wine festival that opened Wednesday evening in Morges, is a great place to start learning about Swiss wine in particular, or about wine in general, suggests Yves Paquier, who offers a beginner’s course in wine tasting at Arvinis. English-speakers in particular can use the festival as a springboard to learn more about local producers and decide which caves they want to visit later. 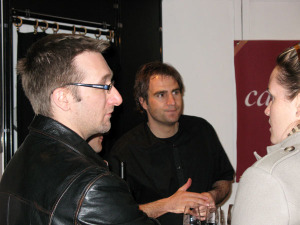 Visitors pay a CHF20 entry fee, which gives them a glass and they are then free to make the rounds, sampling as much wine as they like. The atmosphere is convivial and drunks are a rare sight: most people come to learn about the wine rather than drink themselves under the table. It’s a popular place with people under 30, who come with a host of questions. Robert Taramarcaz is a remarkable young winemaker from canton Valais, Domaine des Muses, whose Fendant (the Valais name for Chasselas) was voted number two in Switzerland in October 2007. At his stand a group of young people listened intently while he explained the difference between his classic Fendant, designed to be an aperitif, and another which is a gastronomic wine, designed to go with elegant fish dishes, for example. The first is “fresh, more acidic, fruity and should be served cooler,” he explained, while the other is “rounder with aromas that stay true to the grape, where the fine lies are larger.” They liked the wine and one asked what that word “lees” means. [Ed. note: some wines are left in contact for a while with their sediment – yeast, skins, pulp – to gain more flavour].

Paquier, who has taught for several years at the Changins wine school in Nyons, part of the federal grape and wine research station, offers some tips for beginners as well as people who like wine but are unused to the prospect of sampling 2,000 of them at a time. He points out that the festival exists to let producers present their wines, rather than sell them, although they will take orders. “You’re not obliged to buy, and producers are not pushy.” Winemakers use Arvinis to introduce their newest wines and they’re anxious to get feedback. Tell them what you think, what you like and what you don’t, says Paquier.

If you want to order, some but not all producers offer discounts and sometimes free delivery for orders taken during Arvinis. A good alternative is to make a date to visit the cellar later. Swiss vignerons are often small businesse and while they welcome visitors you must usually make an appointment. Point in case: I visited a small producer this morning, but we had to cut it short because he had a problem with machinery and at a critical point in the bottling process this couldn’t wait.

Producers will often offer you a clean glass, taking your dirty one. And at the end of the evening, when you take the train home, you will be one of dozens of cheerful people boarding the train with their souvenir glasses.