The Arvinis wine festival in Morges is one of the main events of the Swiss wine calendar. Links to related GenevaLunch articles appear at the end. 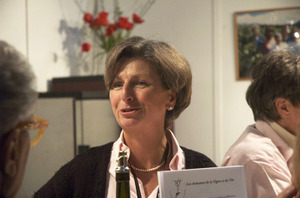 Morges, Vaud, Switzerland (GenevaLunch) – Coraline de Wurstemberger greets a guest to her Domaine Les Dames de Hautecour in fine pearls and soft gray wool. A tall, elegant and gracious woman, her background as the daughter of an old Geneva family is what first makes an impression. That quickly gives way to her energy and enthusiasm as she talks about wine, her wines in particular and women who make wine. De Wurstemberger is president of the Artisanes de la Vigne et du Vin, a group of Swiss women who produce wine. The group has a stand at the centre of Arvinis that is a hubbub of talk and tasting, a very  popular stop on this indoor wine route that features 2,000 wines.

The stand is popular, says De Wurstemberger, laughing, in part because women from four cantons share it to reduce costs and it gives Arvinis visitors the rare opportunity to line up Chasselas and Pinot Noir from the different cantons and do comparison tasting at the same table. “We always send people around the table to taste each other’s wines – we promote each other,” she points out. “We know each other well.”

The six make up the tiny body that represents Switzerland in the International Associated Women in Wine, created in 2002. De Wurstemberger is the current president and the group will be holding its annual meeting in Geneva in May. They present an intriguing face of Swiss winemaking. To be a member a woman must be a producer who runs the business alone. While de Wurstemberger says women don’t necessarily make better wine, “In general, to survive, you have to be a bit better. We have all made the choice to run the business, even if we inherited it. I think this gives us a broader vision, which is our strength.”

If the group’s reputation in the Swiss wine world is anything to go by, she is right. Marie-Thérèse Chappaz from Valais is widely considered one of the country’s top producers. Her wines have great character and stocks of her top of the line wines quickly disappear. The others all have domaines known for their quality and they frequently send clients and visitors to each other’s cellars, knowing these are good references.

De Wurstemberger, like the others, did not grow up dreaming of becoming a vigneronne, far from it, but her ties to the family grapes were always strong. Wealthy Geneva families in the past sent their sons into the banking business and
passed the family lands onto their daughters. She was born in Paris, raised mostly in Italy, trained in art restoration and eventually worked in the field for the ICRC (International Red Cross) for several years. Her grandmother, Dora, to whom she was close, inherited the 5.5 hectares that have been in the family for 350 years and oversaw them as she led the peripatetic life of a diplomat’s wife, traveling the world. Grandmother Dora stopped managing the vines and wine production in 1985 and when Coraline de Wurstemberg’s father died ten years later she decided to take on the
family business, with her two brothers. She headed off to Nyon to the Changins agricultural and research station to study grape-growing and wine production and later bought out her brothers. Today she runs a small winery, but with a passion and a love for what she has inherited: in 2007 she created a new wine called “Dora,” named after her grandmother.