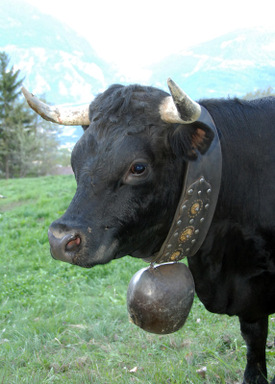 Valais, Switzerland (GenevaLunch) – Wednesday night in villages near the resort of Crans-Montana farmers and friends cheered, wine glasses in hand, as Spring was officially declared in the Swiss Alps by those who know the mountainside best.

The fighting cows were let out of their barns, with the “girls” torn between wanting to fight and enjoying their first green grass in months. They did plenty of both.

You’ve read right: these are cows, not bulls, and they like to fight in Spring. Competitions in arenas to watch them fight are a popular Valais pastime, with a certain amount of betting going on. The finals of a series of cantonal competitions in Valais take place Sunday, 11 May in Sion, when the Valais queen will be crowned in front of an expected crowd of 10,000 people.

These are not animals pushed to perform for humans: the cows fight even when left to themselves.

Most of the cows are pregnant when May arrives. Hormones are doing interesting things, the grass smells great even to humans with weak noses and the cows have been cooped up all winter.

Send them outside and they test their social hierarchy muscles. 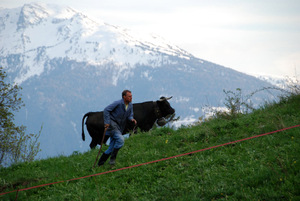 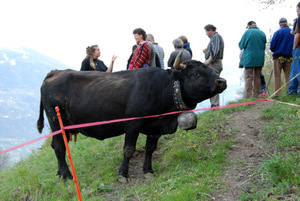 Every herd has a natural leader, the queen, who is determined over the course of several weeks, through fights. She is the strongest and smartest, the one who leads the herd to the best grass and helps it survive tough times outside when summer storms whip the mountain peaks. 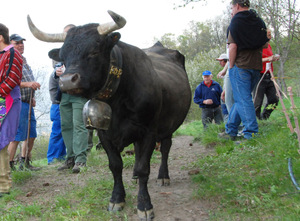 The fighting cows are one of Switzerland’s great natural wonders. The short-legged black and dark brown cows belong to the Val d’Herens breed, beef cows that are kept here mainly as milk cows. Most of their milk ends up in the raclette cheeses whose texture and flavour vary from one Swiss valley to the next. The cows are extraordinarily adept at navigating Alpine slopes and finicky summer weather that can bring drought, violent thunderstorms and even July or August snows. They stay in barns for the winter, taking it easy and munching on straw during the early months of their pregnancies, which begin in November. 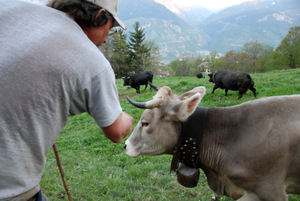 They have a mid-mountain interim period in Spring, wearing those large bells  that tourists love. The bells correspond in size and weight to the animal’s size, so a farmer can tune in to where each animal is, as if each has its particular ringtone. When they go outside in May it is only for the evening at first. After a few days, they stay out for the
day.

“Their joints are stiff the first day or two,” says Fuchs, who explains that during the winter he takes them out of their stalls for short periods.

Other breeds of cows provide more milk and therefore more Swiss cheese. Most Val d’Herens herds have some of these good milkers, often gentle, quiet gray cows  that look like distant cousins to deer. The gray cows bring a bit of order and peace to the feisty Val d’Herens herds.

Good and sensible as these other cows are, the ones that farmers in the Swiss Alps love are the fighting cows. Going out with farmer Bernard Fuchs, his neighbours and friends Wednesday evening gave a glimpse of the man-animal relationship that has deep Swiss roots.

The cows were delighted to move, after being cooped up, and their main interest at first was grass. They frequently wandered up to people standing on the fringes of their electrically fenced area. The cows sniffed, said hello, were curious. Farmers, busy discussing agricultural politics, absent-mindedly scratched cows on foreheads. 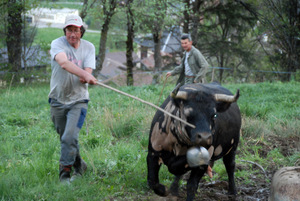 And then, suddenly, a cow paws the dirt. A cow wanting a fight often snorts and stands in an unmistakably aggressive pose. She bellows. Nearby cows trot away rapidly if they aren’t interested in taking her on. She wanders away. Seconds later dust flies – two cows are going at each other, head to head, horns locked. Two men run up, shouting at them and tapping them with light sticks to get the cows to separate. A bit of tussling is okay, but serious fighting can injure one of them and the younger cows need to learn this. At the same time, the small crowd gets excited and cheers of “Hup! Hup!” echo across the field.

One of the younger cows suddenly stops on a high bare spot and looks around her. “She’s saying she wants to fight and they others are saying no,” chuckles Fuchs. We watch as nearby cows move away sharply. The belligerent cow watches them, then abruptly trots after them. “They’ve said no, they don’t want to fight, and now she’s making it clear that means she’s won,” points out Fuchs, who owns some 30 cows.

Lea, an 11-year-old cow, comes up to say hello. She’s the queen of the herd and so far, none of the others have tried to challenge her authority. She calmly goes back to eating. 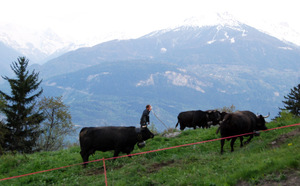 The first two evenings outside the cows leap for joy and kick up their heels when it’s time to go back to the barn. Fighting and fresh grass can wear a girl out. A few weeks from now, when they are used to the great outdoors and the green grass diet again, these cows, hefty as they are at 500kg, will run up the mountainside at an impressive speed. Every year they look just like happy kids getting out of school for the summer.