Hats off! post on killing a business hour at the Kempinski 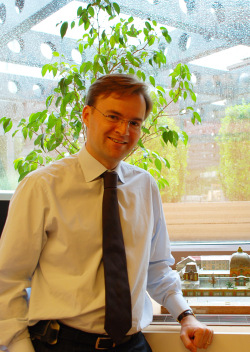 The old hotel was a familiar haunt to many in the English-speaking community, a place where  international schools often held their balls or graduation dinners and families celebrated baptisms and weddings. Mossu believes that for several years it was perceived locally as one of Geneva’s two international hotel chains (the other was the Intercontinental) that catered in large part to an American clientele and beyond that it generated little local interest.

One of his first jobs as director of the new hotel, in late 2006, was to ask Genevans what came to mind when the hotel was mentioned. The answer was: mostly a blank. Mossu intends to change that. He spent hours meeting people at the hotel’s large corporate accounts in Geneva to find out what they thought should be changed. "The product," they told him.

Mossu, for this interview, sat in what will soon be the conference and meeting rooms wing of
the hotel, an area that the third week in July still had workers
scurrying around putting the finishing touches on floors and walls. Some were adding sinks to a large bathroom. The signs of coming
elegance were everywhere and marble-polishing rags were out in force,
but a bit of tweaking was still needed. The elevators from the parking area had just been moved but there were no signs for them, nor for the toilets. An energetic Mossu said he was not fazed by the minutae of the remaining tasks for the hotel makeover, even if
his wife was about to give birth to their third child and he had just moved into a new home days before. 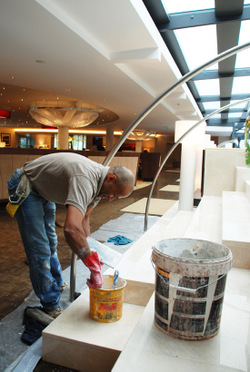 Initial reports in the hotel industry media in early December 2006 said the new Kempinski
would be up and running in two stages, by February 2007 and May, but the refurbishing project took slightly longer. The hotel was  closed in October 2006 when the makeover, which began before Kempinski’s mandate, reached the demolition stage. Staff were sent home for the three months the hotel was closed but received full pay, which Mossu believes is a Geneva first.

The Noga Hilton, famously owned by Nessim Gaon, was in 1984 the subject of a lengthy legal tussle between Gaon and Swiss television over TV reports of a possible sale. A year later the hotel received a boost when diplomatic and media teams poured in for a month during the Reagan-Gorbachev summit that signalled the end to the Cold War.

The hotel was eventually put into receivership, however, and purchased in 2001 by a UBS asset management company which then sold it in 2004 for a reported €192 million (Download HotelInvestmentHighlights.pdf) to a private investor, who remains discreetly in the background (and who is the source of much speculation). The new owner(s) gave Kempinski the mandate to manage the hotel. Kempinski’s Leading Hotels of the World trademark might serve as an indication that the priority would be attracting foreigners who are willing to pay a premium for a top hotel.

Mossu doesn’t deny the hotel is going for this group. The top floors’ Geneva double suite of 700m2

is one of the largest executive suites in the city. Its target market is heads of state, he notes. It will be renovated by 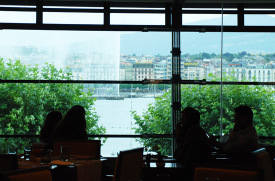 The top priority right now is to bring in local trade. "A hotelier’s
job today is to attract local clientele. We want to give back to
Genevans their terraces and restaurants, a sense that this is somewhere
they can go for brunch or lunch, meetings, weddings." The hotel expects
to host private board meetings, for example, thanks to its new catering
facilities.

These will be off to a good start at the end of August when
Kempinski Geneva provides the food and old town tents to cover the main
street for the relatively new upmarket arts event, the St Prex Festival, near Morges.

Mossu knows the many faces of Geneva well. He grew up in the city,
the son of a French father and English mother. He attended the International School of Geneva and became Swiss. He went on to the Hotel School in Lausanne.
Like so many Genevans with multi-cultural backgrounds he has kept his
international spirit. He married a Spanish woman and worked for
Intercontinental Hotels in Madrid ("three times because I love that
city"), London and San Francisco. He did a stint with Hilton which
included working as business development manager at the Noga Hilton for
three years before moving on to the Jumeirah Beach hotel in Dubai. Mossu then went to work for Kempinski, based in Istanbul for a year before he won the Geneva posting.

He
expects to stay for a while. "Geneva is not a turning plate place in
the hotel industry, the way some  cities are. Knowing the market here
well was very important." He says he knew perhaps half of the staff
when he arrived in Geneva in 2006, from his earlier time at the Hilton.

The hotel employees have received much of Mossu’s attention, given
the need to get 230 employees up to Kempinski standards in short time.
"We started in December by having conversations with staff. They’d been
sent home to watch TV and at first there was a lot of uncertainty. They
were relieved once they knew they were being pushed into the five-star
arena with the means to do it. They asked questions like are we going
to be able to buy new knives and forks and uniforms and we told them
yes." The hotel began an intensive training programme and now has 300
employees. 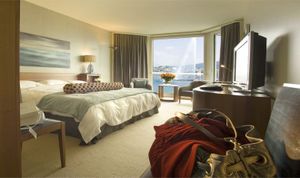 Before and after: Noga Hilton’s rosy room look from a bygone era; new and lighter Kempinski room

Mossu is proud of the fact that the new group reopened the hotel 20
February, just 80 days after Kempinski took over. "The normal thing in
the hotel business is to arrive 18 months before a hotel opens and then
you open with 90% of your rooms." Two hundred of the 423 rooms were
refurbished – gone were the pink and green rooms of a bygone era. The
hotel was able to honour Hilton’s commitments for Geneva’s busy spring
season of shows: the motor show, jewelry and air shows.

By May the hotel was back in business on a nearly normal scale, with
300 refurbished rooms open and the others available but scheduled to be
redone in 2009. 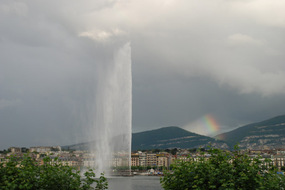 Geneva’s jet d’eau is magnificent from the hotel’s Floor Two balcony, even on a dirty weather day.

Travellers will have a chance to appreciate the new rooms but
Genevans are already sampling the changed face of the hotel. The facade
is startling to old clients, in part because the pedestrian entrance is
now on the lakefront rather than the side. The interior is airier, with
far more light streaming in than in the past. The bar has a larger
outdoor area with one of the best views in the city of the famous jet d’eau.

The biggest change is conceptual, designed with local guests in
mind. "It’s a different philosophy," says Mossu. What the hotel calls
Floor Two is a large, open social space. "It’s the heart of the hotel,
with the restaurant, bar, lounge, and so on." Prices are meant to
attract customers from the city, and not just wealthy ones. "The plat du jour
is SFr19 or you can get a better version of it for SFr24." In the past
hotels like the Hilton charged exhorbitant prices to a captive
clientele, he argues. "That’s completely wrong – you’re shooting
yourself in the foot if you do that."

The public areas are now open. The restaurant Le Cygne will soon
become Le Grille, "but not all dark red and mahogany," laughs Mossu.
Expect open fires in front of you. Finishing touches to the hotel will
continue during August but by the rentrée, when school starts
in September and people have returned from holidays, the scaffolding,
tools and workmen will be gone. "And there’s plenty of signage coming,"
Mossu promises. "Signs for everything."