Féchy, Vaud, Switzerland (GenevaLunch) – Ring out the new, bring in the old*! Winemakers have been singing this verse for centuries, almost as long as they have been making wine. 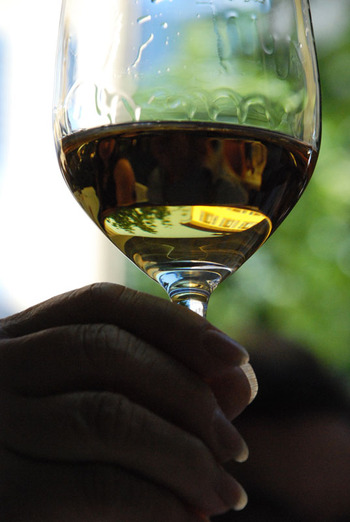 The world in a glass of wine: nature, your friends, the food on your table, history, your surroundings. Vinea 2007, Sierre, Valais.

The love of a fine old wine is a thread that runs through every wine-producing culture, but ask a winemaker to tell you why old wines matter – why don’t we simplify life and drink them all young? – and you’ll be paid with a look of astonishment, even if you’re quick to add that you, too, love a fine old wine. But you wonder why, precisely.

"Every European winemaker thinks he knows why." Raymond Paccot of La Colombe winery in Féchy barely pauses before he passionately offers a litany of reasons why we love to age our wines. "There’s so much wine out there today wearing a lot of makeup. Just as with people, finding real character is more interesting."

High on the list is complexity. "A wine that is complex is one that goes off in different directions and continues to open like a thousand delicate leaves unfolding: this perfume, then that, and then that. This is a noble wine! real wine."

He ends with a sudden grin and the remark that in reality, no one can say precisely why we love older wines because there are too many answers.

I had put the question to Paccot as a fitting close to GenevaLunch’s series on "A year in the life of a Swiss winemaker." Paccot, who is widely considered one of Switzerland’s finest winemakers, is a member of the select Mémoire des vins suisses (MDVS) group which was created in 2002 to build a bank of the best Swiss wines with good aging potential.

The project was started by four wine journalists in Zurich who invited 26 of the country’s top producers to each contribute CHF4,000 a year and 40 bottles of their best wines. Some of the wines are sampled every year, with the producers comparing one of their young wines with an older version of the same. 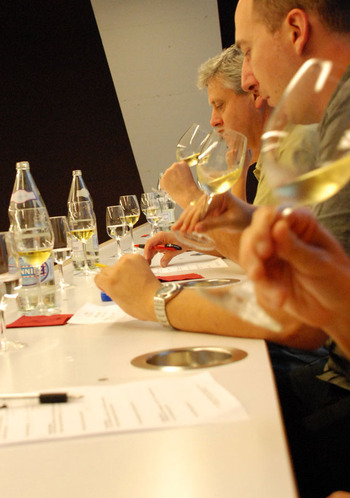 Dominque Rouvinez, also a MDVS member, told GenevaLunch that the MDVS project has already shown the very good aging potential of some Swiss white wines, eroding the popular notion that only red wines age well. Some of Switzerland’s white wines have excellent aging potential, an observation with which Paccot agrees.

For Paccot, history offers the most basic explanation for why we love to let wines mature. "Wines were historically made specifically for keeping, which gave them real economic value. So there’s always been this sense in wine-producing countries that good wines represent wealth."

The only wines that age well are those made from grapes, which accounts for the economic value placed on grapevines. Tartaric acid is found naturally in quantity only in raisins and it’s the backbone of wine made from grapes, as it plays a major role in the way these wines age and keep. It also is one of the keys to a wine’s overall balance. Too little of it and a wine is insipid. Too much and the wine can taste sour. Working with it is at the heart of the winemaker’s art. "It’s an acid that is fresh and aggressive," Paccot points out. "But in fine wines it makes all the difference in helping them become better, in developing their complexity as they age."

Perfecting a wine that will improve with age is far from an exact science despite modern methods of winemaking. Not all wines have good aging potential. The winemaker who has any chance of success must start with a strong marriage of grapes, land and climate, the mix to which the French word terroir refers. He or she must have good winemaking skills, but there is also that indefinable flair that comes from sensing the point at which chemistry meets poetry. 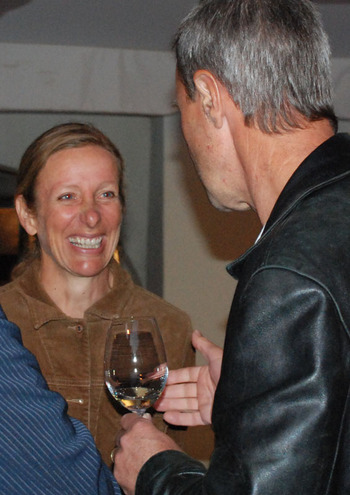 Marie-Thérèse Chappaz, whose Cave Liaudisaz, Fully, Valais is known for the perfection of her sweet wines, is a member of the MDVS held in high regard by fellow vignerons. Here with Raymond Paccot, Vinea 2007.

"A good winemaker wants to leave something to posterity, leave a trace behind," Paccot believes. "He wants to create a wine that will last as long as possible. It’s a bit like leaving a message for people who will find it later. You want to believe it will end up people whose philosophy lets them admire the wine and enjoy it."

That brings us to the wine drinker. The problem, and the challenge, is knowing when a wine is at its best. "That is the problem for all of us," says Paccot. "You never know when you’re at your peak until you’ve passed it. It’s a bit like the stock market. You have to like the game."

The process is not random, however, and a starting point, he suggests, is to familiarize yourself with wine’s aromatic families and how they work.

Wine courses help train your nose to recognize them. There are several private ones in the Lake Geneva region as well as
those offered by the Swiss Federal University of Applied Science at Changins in Nyon. An at-home option is an aromas wine game, of which Le Nez du Vin, available in English as well as French, is one of the best-known.

France’s national agricultural research institute, INRA, recently announced that its researchers have extracted purified concentrations of the various  aromas, normally found mixed with others. The databank INRA is building and new techniques make it possible to detect "aroma precursors" in wines even before the grapes are harvested, which will have an impact on how winemakers decide which of their wines will age well. 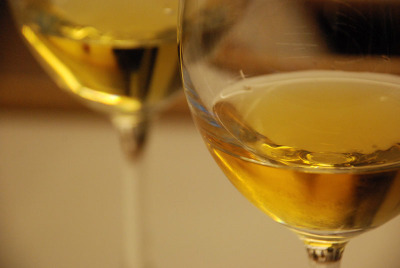 The old and the new: Chateau Lichten from the Rouvinez brothers in Sierre, 2001 and 2005, compared at the annual MDVS meeting during Vinea 2007

Patricia Briel of Le Temps points out that while Swiss winemakers, long known for their young wines, are moving towards creating fine aged wines, the French, ironically have been trying to create wines that can be drunk younger, to reach out to a larger market.

Paccot concedes that today’s wine market poses a problem. "The question for us is: are there going to be enough consumers who are ready to invest their time in older wines? Today people look for quality and character in their wines, but at the same time we’re living in a world where people want instant gratification. To make good wine and to learn to appreciate it you need time and patience, so we have a paradox." Initially, people tend to buy from producers they know and whom they learn to trust, but with time, wine drinkers should develop confidence in their own ability to judge.

"This isn’t the Olympics," Paccot cautions. "It isn’t just a question of the one that wins, the good one. There can be many good ones." 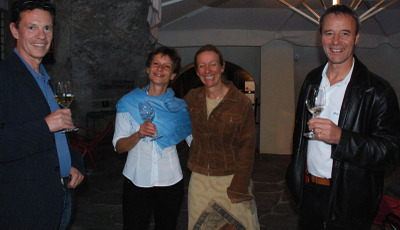 To complicate the learning process, add in culture and acquired tastes. When he was in his early twenties Paccot visited the grandfather of a friend from France, a family that produced one of the famous Jura vins jaunes. When the old man took him on a tasting tour, Paccot thought the first bottle was barely acceptable, leaving the grandfather shaking his head sadly. By the last and oldest bottle the young guest and would-be vigneron declared it undrinkable, but the old man proudly proclaimed it a great wine. Paccot laughs now, but says he wasn’t ready for vin jaune then.

"We evolve, just like wine." And that’s what makes it all so interesting.

* A twist on Tennyson’s famous poem

Earlier articles in the series, starting with the first:

Chez Paccot, pruning for the next great wine 26 March 2007